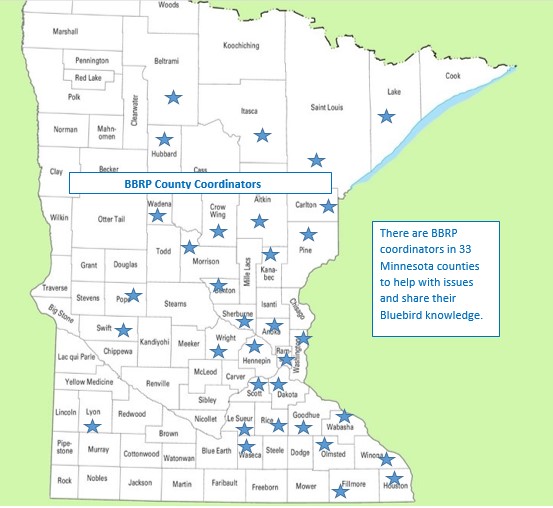 Use this link to find the name and contact information for the County Coordinator in your area!  Click here!

Introducing two new County Coordinators. Cynthia Sabinske, from Ghent, is an additional coordinator in Lyon County. She has been monitoring and maintaining a trail at Candem State Park and just purchased ten new boxes for upgrades on that trail.

Jon Allen, recently retired Park Supervisor for the city of Savage, has joined us as a coordinator for Scott County. He has been actively maintaining trails and mentoring volunteers in his area for trails at McColl Pond Environmental Learning Center and Canterbury Park in Savage. – Welcome to them both!!

Fred Ellingson from Upsala has been making bluebird nest boxes like gang bursters and has put the word out of their availability to bluebirders in Morrison county.   Mike Fulford the BBRP Morrison County Coordinate in Little Falls has taken Fred up on his offer for boxes and has filed this report.  “Fred, I just wanted to give you an update on the 20 nest boxes I picked up. All 20 are set up on posts and ready for the Bluebirds. Sister Carolyn is very happy with her trail of 12 and has had a pair of Bluebirds checking out one pair in particular. I want to thank you again for your generosity in donating these boxes. I will keep you updated as the nesting season progresses.”  – Mike Fulford

August 29, 2021: Just finished my report for 39 houses in the City of Anoka. We are down 71% fledged from last year (43 versus 149).  Swallows and chickadees took advantage of less competition utilizing 78% of our houses.

Thanks to everyone who helped out this year with the bluebird monitoring!  Only three of you actually got to see some bluebird babies this year at DCTC, Meadows and at Diamond Path.  The rest of our parks were a BB bust.  However, we had plenty of lovely little chickadees take up residence in our boxes.  I even got to see some chickadee babies that were probably only a few hours’ old, which was really something.  Of course, I forgot to bring my phone to take a pic!
A big surprise for me was to see a brood of 3 BB babies in an abandoned chickadee nest at Diamond Path Park.  Sadly, only one of the babies fledged.  I wonder if the nest material had anything to do with that.
The most resilient BB pair was located at DCTC.  Not only did their babies survive being moved by a work crew who were installing a new softball field, the pair stuck around and produced another brood of babies for us in late July after we moved the empty box to a safer and quieter spot a bit further away.  Many thanks to Pete Hoffman for being such a dedicated monitor for this pair!  Without his quick thinking and steadfastness in June, the original brood of babies probably wouldn’t have made it.
I’m in the process of cleaning and taping up the boxes for the winter.  I learned the hard way that if I leave the lids closed, mice will nest over winter.  I have never smelled anything worse than an abandoned mouse nest in the spring!
Nancy Engel  – New Board member & Rosemount trail’s leader

This morning’s trail check results are: 23 eggs, 9 chicks, 5 fledged chicks
The Lost Creek trail has fledged 5 chicks, and 2 boxes have second broods of 3 and 4 eggs respectively. 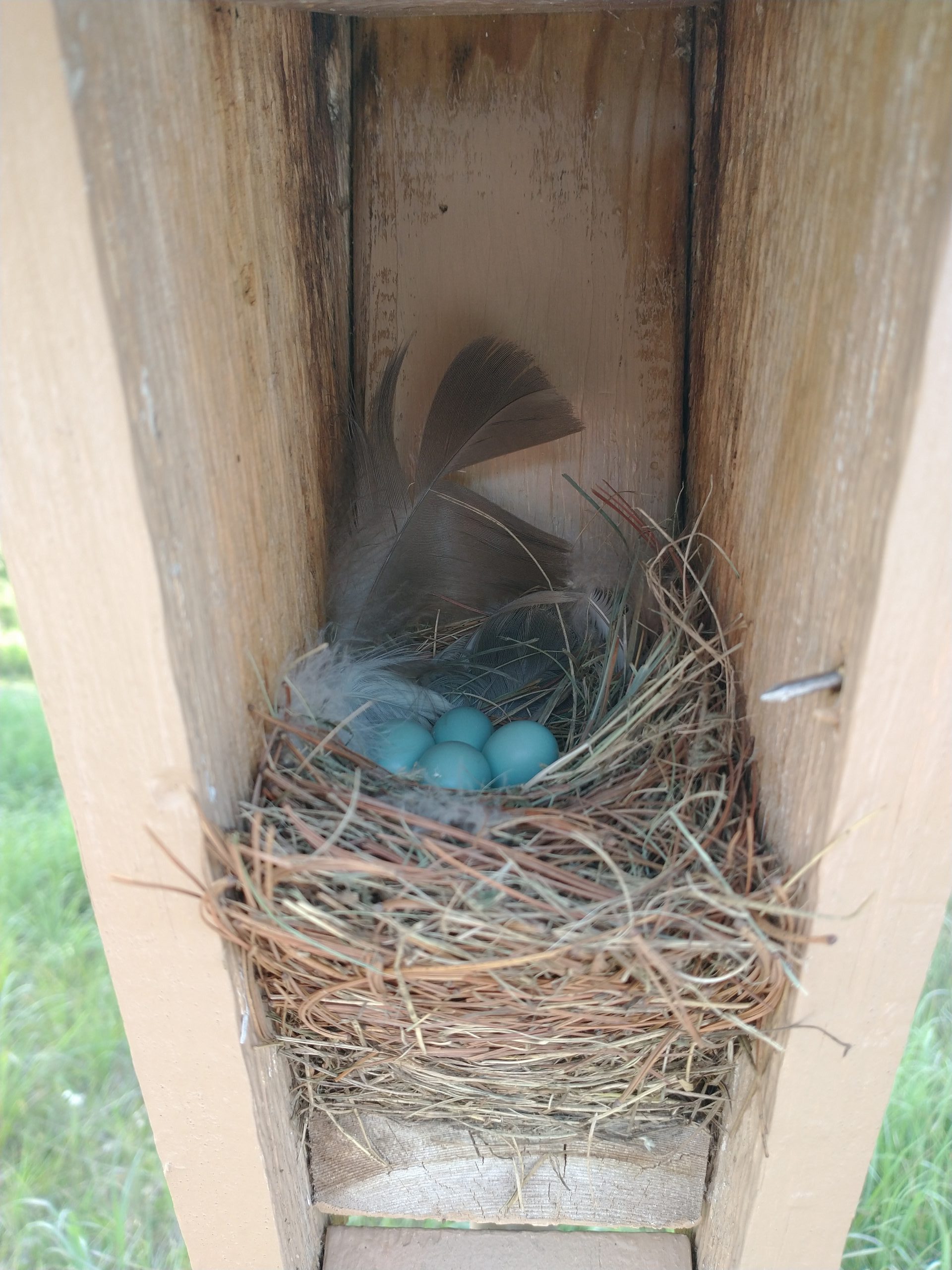 This nest was started by and has been occupied by a bluebird, observed the last 4 box checks. Did the female add the feathers as a deterrent to swallows moving in, or did a swallow try to move in by adding the feathers. 🤔 Either way, the bluebird has won out so far. 4 blue eggs.🤞
This box is next to the box where I found a dead female in the box (4 chicks had fledged from there the week before). A dead male was found on the ground about 50 feet away.
Another pair of boxes in the same vicinity also had a dead female in the box of 1 of the 2.
20 of my 37 boxes are in pairs. Maybe I should split some of those up. Any thoughts on pairs vs single boxes? 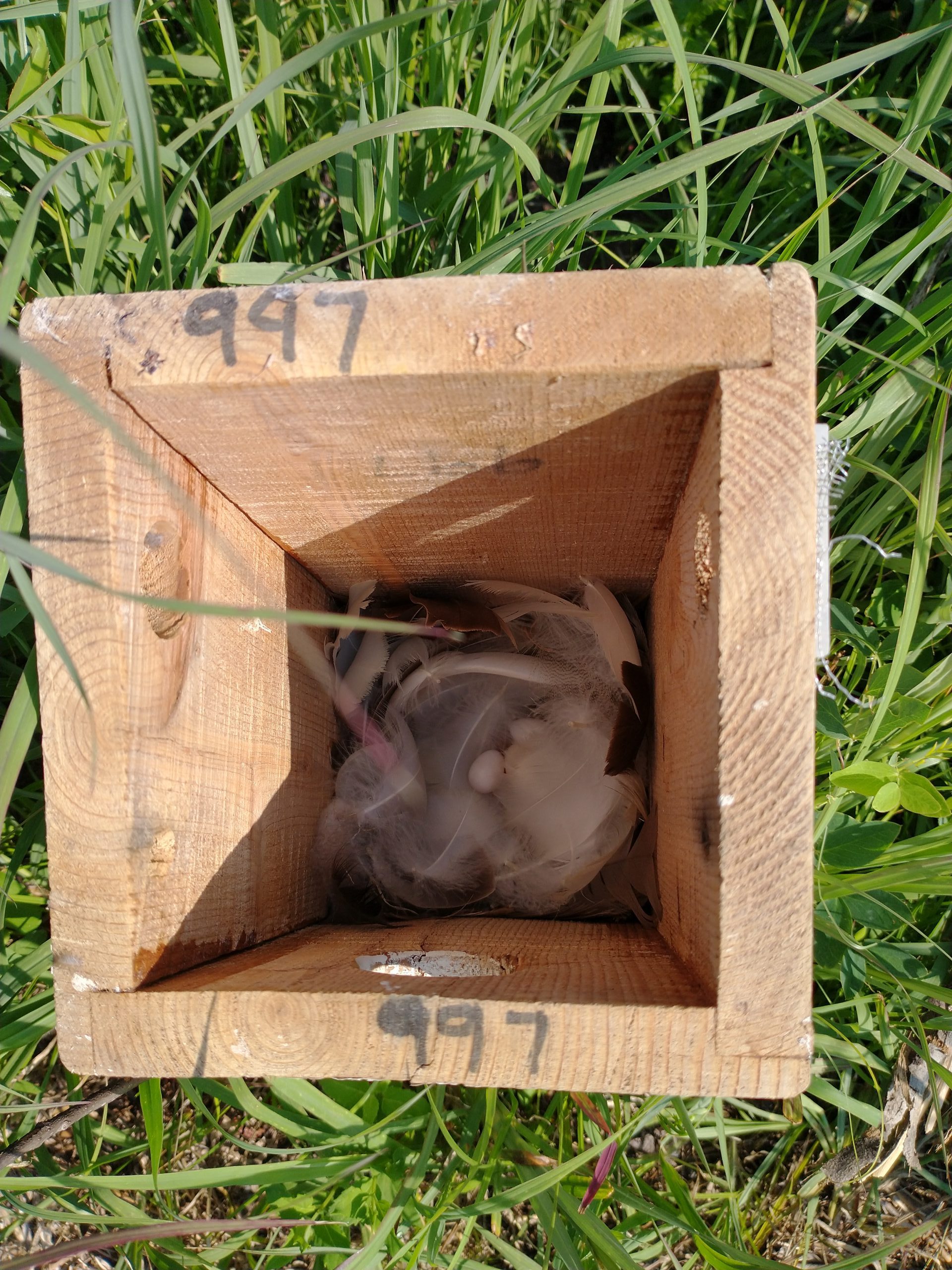 The second pic is a swallow that first laid eggs on the bare floor of the nest box. Looks like she’s added some feathers. Better than nothing, I guess.
Jean Olsen

I have 32 pairs of boxes on Braemar Golf Course this year. 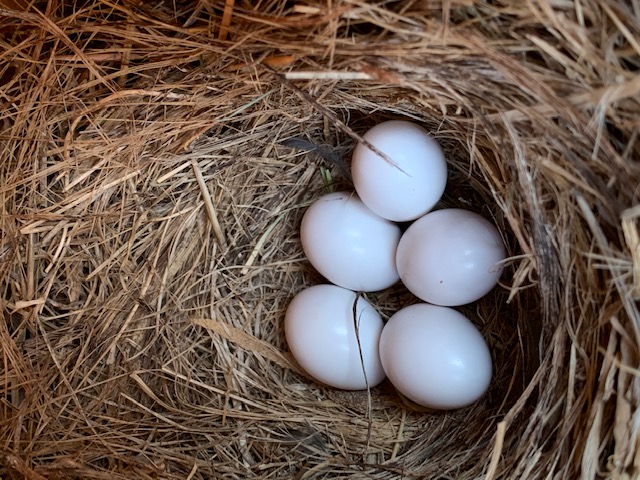 Nest in a new Gilwood box on the former Fred Richards golf course, Edina.  I had a pair that laid white eggs two years in a row in the same nest box at Braemar.  This location is 2 miles east.
Bob Hursh – May 29 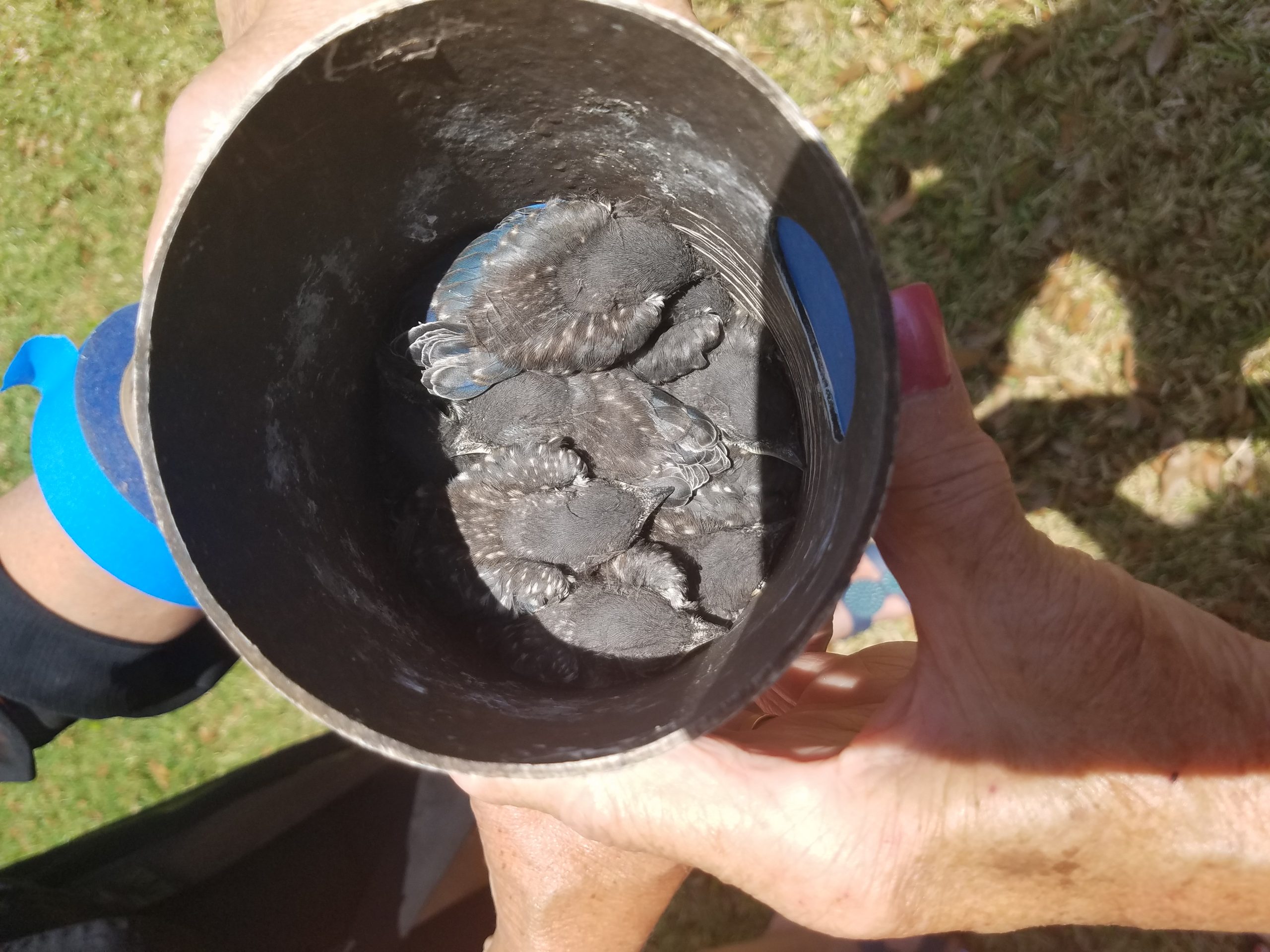 They all hatch and fledged  – Wahoo!
Thanks Jeanne!!

How Many Eggs, Wow ? – Submitted by Anoka County Coordinator – 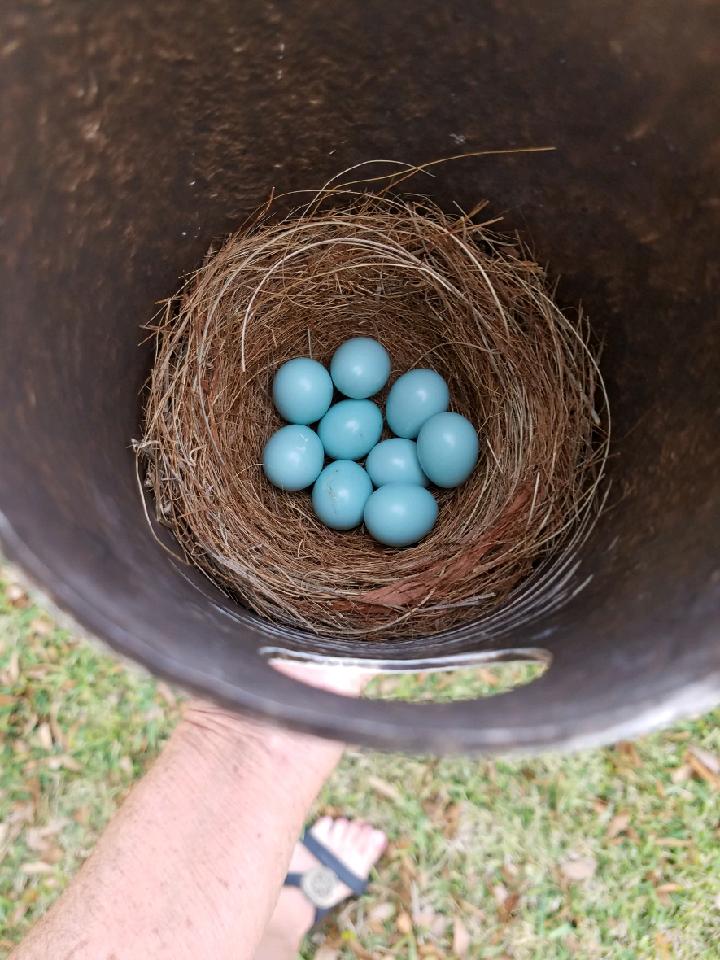 While vacationing in Florida Jeanne observed 2 females and one male in the area, this is what she found in the nest box. Lets hope they all hatch and fledge!